No crucifix behind altar in Bishop Thomas Dabre’s churches

No crucifix behind altar in Bishop Thomas Dabre’s churches

The Cathedral of St. Patrick in Pune has a large image of a resurrected Christ without the cross

St Patrick’s Cathedral (1B, Prince of Wales Drive, Pune 411 001, Telephone: 26360575, 65208522, website: www.stpatrickspune.com email: stpatrickspune@rediffmail.com, Rev. Fr. Wilfred Fernandes, Rector), the principal church of Poona diocese, is the seat of the Bishop of Poona, Most Rev. Thomas Dabre, former Chairman of the Doctrinal Commission of the Catholic Bishops’ Conference of India.


The immediately following information is an extract from my report

THE RISEN CHRIST ON A CROSS

Below are pictures taken on February 8, 2009, at the dedication of a new church to St. Gonsalo Garcia in Vasai when Most Rev. Thomas Dabre, Chairman of the CBCI’s Doctrinal Commission was Bishop. There were other bishops in attendance.

St. Gonsalo Garcia was CRUCIFIED to death, like his Lord Jesus, for his faith. So, how was he honoured at this dedication of the new church building to his memory? By relativising Christianity, the faith he died preaching — juxtapositioning the Cross between the Hindu “OM” and the Islamic crescent. 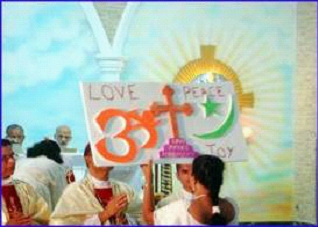 But it gets worse, if that is possible.

There appears to be no crucifix on the altar at the dedication Mass.

And there’s no crucifix on the wall of the sanctuary behind the altar.

We have increasingly been encountering the phenomenon of the “Risen Christ” on a cross, the “resurrecifix” or “resurrexifix“, except that in this church they’ve gone further and completely done away with the Cross.

According to the rubrics of the General Instruction of the Roman Missal (G.I.R.M #117, 308), the presence of a crucifix (on the altar) is mandatory for Holy Mass, and “appropriate … even outside of liturgical celebrations“, more especially when there is no large visible-to-all crucifix behind or in proximity to the altar.

So, for the Chairman of the Doctrinal Commission of the CBCI, who was also at that time the diocesan Bishop, to have celebrated Mass with a crucifix neither on the altar nor near it visible to all, was a flagrant violation of the rubrics of the GIRM.

Bishop Dabre appears to have made it a habit* to have around him the absence of the crucified Jesus, and the presence of a risen Christ without His Cross.

To have the risen Christ on a cross is an aberration.

To have the risen Christ without the cross on the backdrop behind the altar is yet another aberration.

One can say that it is mandatory for a church to have a large image of the crucified Jesus behind the altar.

*Most Rev. Thomas Dabre is presently the Bishop of Poona.

And this is what one finds in his cathedral, St. Patrick’s: 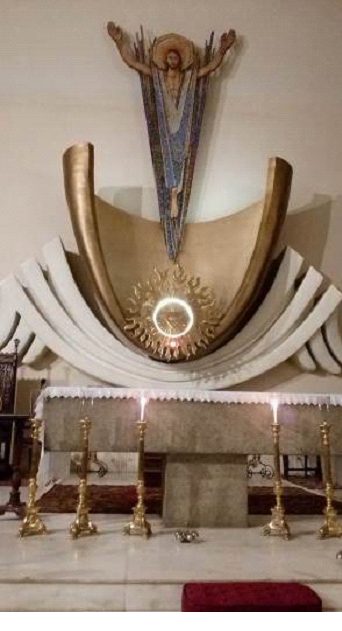 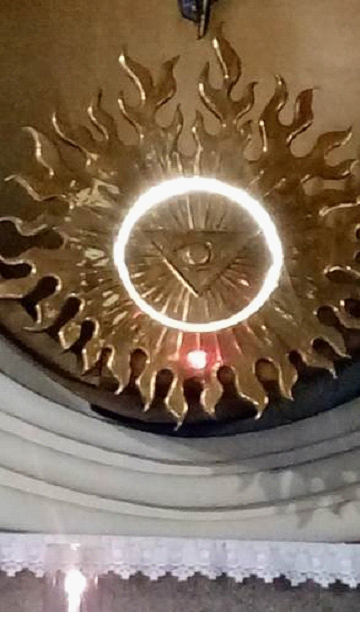 Admittedly, the Catechism of the Catholic Church (CCC) says:

651 “If Christ has not been raised, then our preaching is in vain and your faith is in vain.”521 The Resurrection above all constitutes the confirmation of all Christ’s works and teachings. All truths, even those most inaccessible to human reason, find their justification if Christ by his Resurrection has given the definitive proof of his divine authority, which he had promised.

653 The truth of Jesus’ divinity is confirmed by his Resurrection. He had said: “When you have lifted up the Son of man, then you will know that I am he.”524 The Resurrection of the crucified one shows that he was truly “I AM”, the Son of God and God himself. So St. Paul could declare to the Jews: “What God promised to the fathers, this he has fulfilled to us their children by raising Jesus; as also it is written in the second psalm, ‘You are my Son, today I have begotten you.'”525 Christ’s Resurrection is closely linked to the Incarnation of God’s Son, and is its fulfillment in accordance with God’s eternal plan.

But one must not forget the bronze serpent incident of Numbers 21 which Catholics use to refute Protestants who condemn “graven images” — statues, icons and images including that of the crucified Jesus:

Question: “Why is a bronze serpent used to save the Israelites in Numbers 21:8-9?”

In Numbers 21, the people again got discouraged, and in their unbelief they murmured against Moses for bringing them into the wilderness. They had already forgotten that it was their own sin that caused them to be there, and they tried to blame Moses for it. As a judgment against the people for their sin, God sent poisonous serpents into the camp, and people began to die. This showed the people that they were the ones in sin, and they came to Moses to confess that sin and ask for God’s mercy. When Moses prayed for the people, God instructed him to make a bronze serpent and put it on a pole so the people could be healed (Numbers 21:5-7).

The people did get healed when they looked at the serpent, and the image was kept for many years.

The next reference we find in the Bible to this serpent is in John 3:14. Jesus indicated that this bronze serpent was a foreshadowing of Him. The serpent, a symbol of sin and judgment, was lifted up from the earth and put on a tree, which was a symbol of a curse (Galatians 3:13). The serpent lifted up and cursed symbolized Jesus, who takes away sin from everyone who would look to Him in faith, just like the Israelites had to look to the upraised symbol in the wilderness. Paul is reminding the Galatians that Jesus became a curse for us, although He was blameless and sinless—the spotless Lamb of God. “God made him who had no sin to be sin for us, so that in him we might become the righteousness of God” (2 Corinthians 5:21). 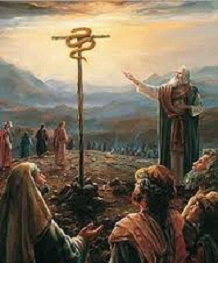 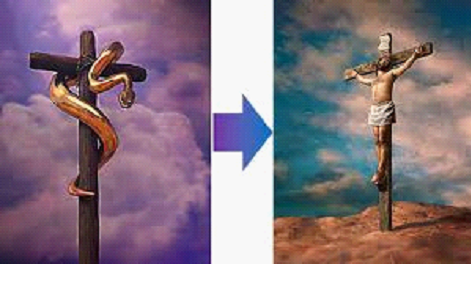 John 3:14 How does Jesus’ reference to the bronze serpent in Numbers 21 refer to his own Crucifixion? What does the expression “be lifted up” mean?

It is John (3:14,15) who explains that “as Moses lifted up the serpent in the desert, so must the Son of man be lifted up that whoever believes in him may not perish, but may have life everlasting.” The significance of Old Testament texts is declared by the sacred writer when he explains Christ’s actions as being “in fulfillment of the Scriptures.”

Lifted up: in Numbers 21:9 Moses simply “mounted” a serpent upon a pole. John here substitutes a verb implying glorification. Jesus, exalted to glory at his cross and resurrection, represents healing for all.

The bronze serpent of Numbers 21 was a “type”, a foreshadowing of the crucified Jesus raised up on the Cross for the healing (physical, emotional, spiritual) of the world. But our churches and our bishops have removed this image of the crucified Jesus and replaced it with one of the Risen Christ. The “tree“, the cross, has been done away with. So Jesus is not being glorified and men are not being healed (cf. USCCB).

See the image of the Risen Christ behind the altar of the National Shrine Cathedral Basilica of St. Thomas the Apostle in the archdiocese of Madras-Mylapore (in the file THE RISEN CHRIST ON A CROSS).

The same is occurring in many other churches across the country.

St Patrick’s Cathedral gets a makeover

The 160-year-old St Patrick’s Cathedral one of the most enduring landmarks of Pune which underwent massive restoration and renovation throughout this past year, will finally be blessed on October 23 in the presence of Bishop of Pune, Right Rev Thomas Dabre, Right Rev Valerian D’Souza, bishop emeritus of Pune, and Right Rev Lourdes Daniel, Bishop of Amravati. The cathedral has been spruced up with beautiful stained glass paintings, wood paneling, brand new acoustics and an impressive altar.
Over Rs 1.20 crore have been spent to restore and renovate the Gothic-style cathedral. It will now house an altar representing the Holy Trinity, comprising a mosaic image of Jesus Christ rising from the Eucharist
and the tabernacle, all mounted on a fibre-glass structure representing the wings of a dove. The exteriors have been restored and re-plastered without compromising on the Gothic touch.

“This is a historic and unique event in the history of the cathedral and the Poona Diocese. We renovated and restored the cathedral while maintaining its simplicity, decorum and dignity, without being extravagant. We are proud of our culture and religion, but are also open to other cultures and religions,” said Bishop Dabre.
The cathedral is the principal church in the Pune diocese, which consists of the civil districts of Pune, Satara, Solapur, Sangli and Kolhapur, and has 13,000 parishioners, the highest number of members of any church in the city. “Keeping in the mind the architectural and heritage value of this cathedral, we took up the challenge to restore and renovate it instead of completely rebuilding it. A team of 16 experts from the fields of structural and civil engineering, art, and architecture, was formed to suggest necessary changes to the structure.
Several fund-raising programmes were held in the last one year to support this work,” said Fr. Malcolm Sequeira, parish priest and rector of the cathedral.
Eighteen stained glass paintings depicting the life of Jesus will don the interiors of the cathedral, including two which show images of the University of Pune and Shaniwarwada. “We have localised these two paintings keeping in mind the city’s culture. Also, the five rose windows have been replaced with new stained glass paintings,” Bishop Dabre said.

The roof, which was previously vaulted, now wears a domed look with provisions for effective acoustics, like sonaspray, a 12 mm-thick spray that prevents sound bouncing off the walls. “Around Rs 18 lakh were spent on acoustics. The sides of the altar will have wood paneling to further enhance the acoustics,” Fr Sequeira said.

While the crucified Jesus was left out, one-sixth of the outlay on the church’s renovation was for acoustics and a further part of it towards religious and cultural inclusiveness (images of the University of Pune and Shaniwarwada!). Shaniwarwada is an 18th century fort in the city of Pune. I guess that churches being renovated in the future will also accommodate reproductions of famous universities and forts… and maybe even images of pagan deities and their temples to promote local history and culture.

Bishop Dabre’s “openness to other cultures and religions” is evident from the four files listed further below.

The altar “representing the Holy Trinity,
comprising a mosaic image of Jesus Christ rising from the Eucharist
and the tabernacle” is an inverted pyramid.

This is what the eminent Catholic journalist Edward Pentin had to say not too long ago:

For me the inverted pyramid is the sign of the Freemason

My thanks to the contributor of the photographs of the renovated St. Patrick’s Cathedral.