Home › Hinduisation of the Catholic Church in India › Mangalore: Catholic worship of Ganesha, the elephant-God

The Mangalore incident is NOT a one-off thing.

As we can see from the following files, worship of Ganesha is rampant among our “Catholic” religious across the nation, in seminaries, in religious orders and in different dioceses. Even a Cardinal is guilty of it:

For all the gods of the Gentiles are devils…

For all other gods are worthless idols…

St. Paul’s teaching on Christians’ being “all things to all men” does not give licence to believers to participate in idol worship and pagan rituals, no matter what some liberal or modernist interpretations might say even using a sentence or two from Nostra Aetate (#2) or other Pontifical Documents in isolation from the context.
I prefer to reflect on our ‘jealous’ God’s many warnings to His Chosen People especially in the Old Testament books of Exodus and Deuteronomy. He wanted the people of Israel to maintain not their racial purity but also their spiritual purity. He knew that any interest by the Israelites in the religious activities of the neighbouring tribes would lead to the assimilation of their rituals, practices and even adoption of their gods, and to monumental disaster to the Jewish people, and this is exactly what happened several times over.
“You will be lured into following them*.
Do not inquire regarding their gods, ‘How did these nations worship their gods? I, too, would do the same’.” Deuteronomy 12:30, New American Bible


*The New Jerusalem Bible: “Beware of being entrapped into copying them.“
Whenever that passage comes to my mind, I like to imagine that God was saying “Do not EVEN inquire regarding their gods.“

The Philippines Bishops’ Conference’s Christian Community Bible translation reads as “Do not look at their gods, saying…“
The Knox Translation, Catholic, 1955, reads “Do not hanker after their observances.“


Since God does not change and truth does not change — though the ‘father of lies’ manifests his evil designs in different disguises and through different means according to the times to deceive those people of God who are unwary — do not God’s warnings hold true even today? Inculturation and interreligious dialogue
can be instruments
of witnessing to Jesus Christ and His Gospel (John 14:6, Matthew 28: 19, 20) and herald God’s Kingdom on earth, but sadly they are being grossly abused by the clergy who end up paying obeisance to pagan deities such as Ganesh (Ganesha) or Ganpati (Ganapati) or Vinayakar (in Tamil Nadu).

The following article shows how widespread this spiritual depravity is in Catholic Mangalore, and the danger posed to the souls of our children and grandchildren through the Hinduisation of the Church in India.

Images from the following article (page 3) have been circulating on WhatsApp.

Even more shocking than D’Souza’s proud reporting of this blasphemous and heretical event is that not one of the scores of Mangalorean Catholic readers’ comments had a word of criticism for it. Instead they acclaimed and welcomed it. The approvers included a priest. Those Catholics, especially those in the social media and positions of authority who elected to remain silent must know they are as responsible before God for the souls that are being lost as the perpetrators of these horrendous crimes against Him.

I have reproduced herein a few of the photographs that accompanied this article and a few selected responses to it.

In the Kannada language Daijiworld YouTube video https://www.youtube.com/watch?v=dvxrquzxj3A
04:21, one can watch the nuns of the order of the Little Flower of Bethany (BS), Santacruz Convent
santacconvent@gmail.com
in Kulshekar, Mangalore and the Order of Discalced Carmelite (OCD) priests (already heavily into the propagation of yoga) of the Infant Jesus Shrine infantjesusmangalore@gmail.com in Bikarnakatte, Mangalore come with offerings of roses and fruits for the idol of Ganesha (01:25) and receiving gifts from it in return (02:32) and getting Hindu charms tied on their wrists (03:44). 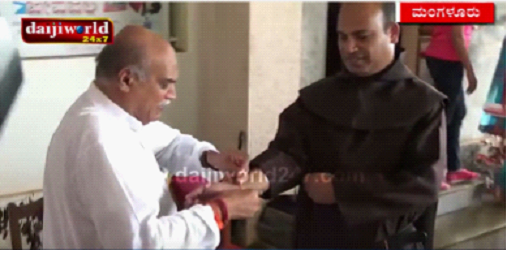 Speaking on this occasion V Nagaraj, Kshetriya Sanghachalak of RSS, said “We really feel happy after the Christian priests and nuns are taking part in precious occasion of Ganeshotsava at Sanganiketan. For the growth of country, there should be a communal harmony in society. Our method of worshiping may be different. As per the Hindu thought, any form of worshiping will reach God. Our motto is to unite the entire society and work for the nation. We are happy that Christian brothers and sisters visited the Ganeshotsava celebrations and wished us well.”

Deputy Director of Infant Jesus Shrine Fr Prakash D’Cunha speaking on this occasion said “Three days ago RSS representatives came to us and invited for this occasion. As the symbol of harmony, we visited here today. The message that we want to give is that, we all want to live united. We want harmony and peace. We thank them for inviting us for this occasion. Let us respect and love each other.” 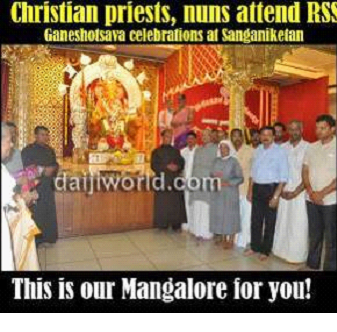 The two images circulating on WhatsApp 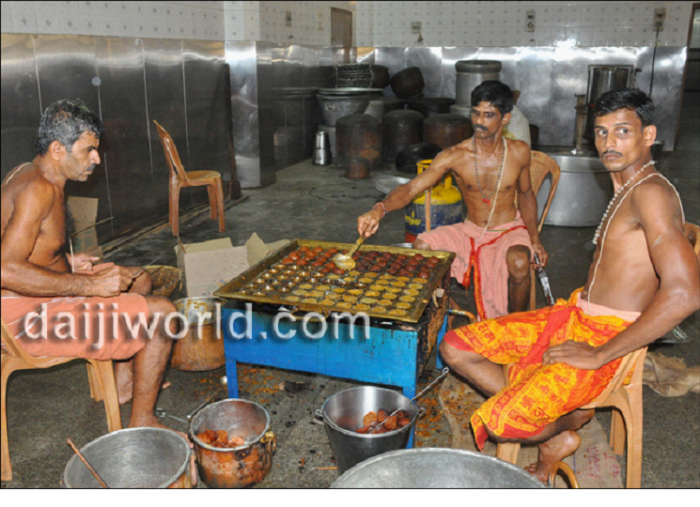 The Bishop of Mangalore is Most Rev. Aloysius Paul D’Souza bp.aloysiuspaul@gmail.com.

Some of the “Catholic” kudos that poured in:

Good gesture really!! Wonderful and appreciate it.
We too invite them for our “NATIVITY FEAST” and to dine together as one family.
This is the true love of GOD which taught all of us and world by “MOTHER -SAINT TERESA”

Really appreciated the move taken By the RSS and the Christian Community. This is the way we all have to live in this beautiful World. Hats off to the Organizers and also who accepted the Invite. Let us all live in peace and harmony.

I personally know Franklin Monteiro, my classmate in high school. Hard working person. Always helpful no matter which religion, caste you belong to. BJP should recognise his hard work and social service. Franklin good job. Carmelite Priests and sisters big applause to you all.

All of us worship one god almighty. May he bless us?

This is what is required today! If we can live harmoniously, then we can lead the world. Great gesture by everyone involved!

Indeed a great gesture on the part of the priests and nuns to participate at the Sanganiketan. It is people like these who make life simple and easy for all. In the eyes of God all are alike and this is amply projected to the pubic (sic) by these priests and nuns. It is people like these who make world A BETTER PLACE TO DWELL IN

Festivals of any religion in Mangalore was always our collective celebration. Looking at Dasara in Mangalore, we collectively feel proud that our city hosts one of the best Dasara festivals in the country. As a kid I remember taking part in the tiger dance. Now when I go to a friend’s wedding outside Mangalore, I dance the tiger dance, because that is the dance form of my home town. It feels so good to see all of us taking part in each other’s celebrations. I am a proud Mangalorean. May God bless our city and may he grant us the peace happiness and wisdom to coexist and celebrate together. Happy and blessed Ganesh Chaturti to all of us. Ganesha is definitely smiling!!!

The photos made me emotional. Memories of those good old school days came back when neighbours and classmates used to invite us for Ganesh Chaturthi and Gokul Ashtami, those visits to nearby temples during Jaatre or car festivals, etc.

HATS OFF. This is the PEACE and HARMONY

I feel so good about it. Felt very sentimental. This should continue for centuries ahead!

I have either organized or participated many of these inter-religious meets. Believe me, the joy on such occasions is explainable. Perhaps it is somewhat the same in heaven where all of us will be one with the heavenly Father without distinction as to caste or creed. Hats off to the RSS dignitaries who extended the invitation and the reverend fathers and sisters who responded to the same.

ARATI IN THE LITURGY-INDIAN OR HINDU?

BINDI OR TILAK MARK ON THE FOREHEAD-INDIAN OR HINDU?

DANCING AND BHARATANATYAM IN THE MASS

IS THE SYRO MALABAR CHURCH NOW OPENLY PROMOTING ITS HINDUISATION?

MAY CATHOLICS CELEBRATE THE FESTIVAL OF HOLI?

MAY CATHOLICS CELEBRATE THE HARVEST FESTIVAL OF PONGAL

PAGANIZATION OF THE CHURCH IN INDIA 01

PAGANIZATION OF THE CHURCH IN INDIA 02

PAGANIZATION OF THE CHURCH IN INDIA-RESPONSES

RANGOLI AND KOLAM DRAWINGS ARE BASED ON SUPERSTITIOUS BELIEFS

THE GOLDEN SHEAF-A COLLECTION OF ARTICLES DEALING WITH ECCLESIASTICAL ABERRATIONS

THE HINDUISATION OF MUSIC IN THE CATHOLIC CHURCH

THE TWELVE POINTS OF ADAPTATION FOR THE INDIAN RITE MASS-WAS A FRAUD PERPETRATED ON INDIAN CATHOLICS?

WHAT IS THE SIGNIFICANCE OF NAMASTE AND ANJALI HASTA?

WHAT DOES THE KUTHU VILAKKU OIL LAMP SIGNIFY?

WHY INDIAN CATHOLICS DO NOT WANT AN INDIAN POPE
http://ephesians-511.net/docs/WHY_INDIAN_CATHOLICS_DO_NOT_WANT_AN_INDIAN_POPE.doc 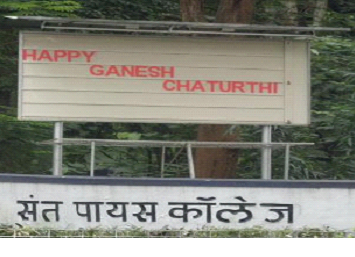 The words in Hindi read: SAINT PIUS COLLEGE. The picture was taken in September 2012

The St. Pius X College, Goregaon (East), Mumbai, is the Bombay archdiocesan seminary greets the citizens of Mumbai on the occasion of Ganesh Chaturthi. The rector of the seminary is Auxiliary Bishop Agnelo Gracias who is also Professor of Systematic Theology. As Fr. Agnelo Gracias, he was rector from 1985 to 1993.

Who is Ganesha, and what is the Ganesh Chaturthi festival about?

http://en.wikipedia.org/wiki/Ganesh_Chaturthi
EXTRACT
‘Ganesha Chaturthi is the Hindu festival celebrated on the birthday (rebirth) of Lord Ganesha, the son of Shiva and Parvati.

It is believed that Lord Ganesh bestows his presence on earth for all his devotees during this festival. It is the day Shiva declared his son Ganesha as superior to all the gods, barring Vishnu, Lakshmi, Shiva and Parvati. Ganesha is widely worshipped as the god of wisdom, prosperity and good fortune and traditionally invoked at the beginning of any new venture or at the start of travel.