Below is the image of the proposed truncated, “broken” cross that was shown in the above report. It was finally not commissioned, probably because of the resistance to it from parishioners. 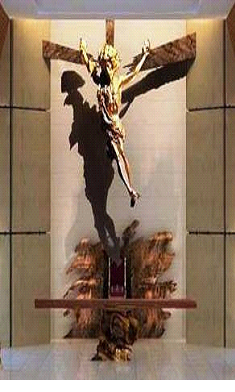 But, apparently the requests and concerns of the Catholics of Dubai, and St. Mary’s in particular, have been dismissed by the progressives who are in control there.

Once again, parishioners of St. Mary’s Catholic Church, Dubai, UAE, have contacted this ministry expressing their indignation and concern that the erection of a stylized cross has been erected.

Regarding http://ephesians-511.net/docs/DISTORTED_CRUCIFIX_TO_BE_INSTALLED_AT_ST_MARYS_CHURCH_DUBAI-01.doc, see attached pictures. This is what we now have in place of the distorted cross, much worse. No opinion was taken and nobody is listening to the unhappy parishioners. Please publish so that somebody takes action.

We have also written to Rome:

Reverend members of the Pontifical Council for the Laity

We are part of Saint Marys Catholic church, Dubai one of the largest congregations in the world. We are a community of believers around 250000 people from different parts of the world, so diverse in language, culture, held together by nothing but the love of Jesus Christ. Our catechism going children number to 7-8000 children. We have a wonderful Bishop who is so humble and caring towards each and every person.

Our church has been and remains a place of solace in this desert that we call our temporary home. A place where the ambience and holiness has prompted many to remain in God’s presence and communicate with him.

As we prepare for our Golden Jubilee celebrations next year, a renovation of church building started sometime back by our outgoing parish priest who has moved back to his home country after the inauguration of the new altar. The alterations that have taken place in the altar area have been very disturbing to most of the common people.

Our church has an adjoining smaller chapel with a separate altar, tabernacle to facilitate in celebration of multiple masses catering to all the different nationalities. We also have a smaller adoration chapel which remains open for a few hours of the day for prayers only.

As part of the renovation a completely revamped altar was proposed which included a distorted broken cross hung from the ceiling, with Jesus depicting to free away from the nails that held Him to the cross. The tabernacle was proposed to be replaced with a high chair for the main celebrant to preside on during the celebrations. The proposal drew a great deal of criticism and objection that the broken and distorted cross was ultimately cancelled. The next proposal was not projected to the lay people but only to the council and those who govern them.

The renovations being mostly completed stands as follows now

A raised choir loft which is wonderful

However the altar is still a concern for us a common man. We have huge cross (not broken but larger than life) hung from the ceiling, still showing Jesus breaking away from the nails and stretching towards a cave like structure which has replaced the Tabernacle. The cave is complete with two or three steps and has a high chair which is supposed to seat the main celebrant. The priest is projected as high above the altar.

The explanation by the designer was that the Tabernacle is just a storage area and need not be placed in the Main church altar. There is a Tabernacle already in the small chapel (masses are celebrated here maybe once in a week).

It grieves me a lot that the Jesus who died for me is not seen on this distorted cross. But someone who is breaking away from death and running towards resurrection??

Shouldn’t the Tabernacle/Crucifix be the centre of attention in an altar when there is no mass celebrated? Even when the mass is celebrated, during reading, should our attention be to the priest who is seated like, i don’t want to say. He is ordained and represents the apostles, I should not comment.

I love my church and want others to do so. We do not want a museum which is depicting some historical / theological event. We loved our simple church which did not hamper our communication with our Lord.

I find no solace and actions from the church authorities in this matter. I do not know whom else to turn to.

I humbly pray on behalf of so many others to please have a look into this matter.

Some pictures are also attached for your attention.

In the earlier letter (see first report http://ephesians-511.net/docs/DISTORTED_CRUCIFIX_TO_BE_INSTALLED_AT_ST_MARYS_CHURCH_DUBAI-01.doc) St. Mary’s parishioners had pointed out that THE TABERNACLE had not figured in former parish priest Fr. Tomasito Veneracion
(OFM Cap)’s scheme of things.

On the following page, please find the images received by us from the parishioners of St. Mary’s Church, Dubai in which it appears that Jesus’ hands and feet are not nailed to the cross. 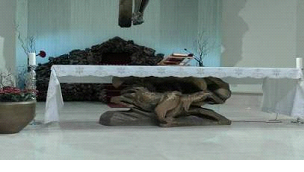 The General Instruction of the Roman Missal instructs that there must be a cross (with a crucified corpus) on or near the altar, “positioned either on the altar or near it, and . . . clearly visible to the people gathered there” (GIRM 308).

The General Instructions on the Roman Missal states:

308. There is also to be a cross, with the figure of Christ crucified upon it, either on the altar or near it, where it is clearly visible to the assembled congregation. It is appropriate that such a cross, which calls to mind for the faithful the saving Passion of the Lord, remain near the altar even outside of liturgical celebrations.

The cross was eventually replaced with a worse one without taking anyone’s opinion. Can somebody do something??