Home › Hinduisation of the Catholic Church in India › CARDINAL OSWALD GRACIAS, ARCHBISHOP OF BOMBAY WEARS A HINDU MARK IN THE CENTER OF HIS FOREHEAD

CARDINAL OSWALD GRACIAS, ARCHBISHOP OF BOMBAY WEARS A HINDU MARK IN THE CENTER OF HIS FOREHEAD

Cardinal Oswald Gracias is the President of the Catholic Bishops’ Conference of India [CBCI], serving since March 2010, and re-elected for a second consecutive two-year term in February 2012!

On February 9, 2013, he was elected president of the Latin-rite Conference of Catholic Bishops of India [CCBI]!!

He is also the Secretary General of the Federation of Asian Bishops’ Conferences and member, Pontifical Council for the Interpretation of Legislative Texts!!!

On April 13, 2013, he was appointed by Pope Francis, along with seven other Cardinals to advise the Pope on Church governance and the reform of the Roman Curia!!!! 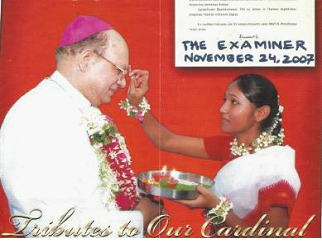