Home › Uncategorized › The Rigging of a Vatican Synod? By Edward Pentin

The Rigging of a Vatican Synod? By Edward Pentin

The Rigging of a Vatican Synod?

The release of the “explosive” interim report during last year’s synod provoked allegations of a rigged process—but that was just the beginning. An exclusive excerpt from a new investigation into what went on at the headline-making meeting of bishops.

[Editor’s note: The III Extraordinary General Assembly of the Synod of Bishops on the Family that took place in October 2014 was controversial not only for the subject matter it discussed, but also for the way it was run. To find out what really went on before, during, and after that heated fortnight, renowned reporter and analyst Edward Pentin spent months speaking to many of those who were there and piecing together what happened behind the closed doors of the Vatican’s Synod Hall. His findings have been published in a new book, The Rigging of a Vatican Synod? An Investigation of Alleged Manipulation at the Extraordinary Synod on the Family, available now as an e-book from Ignatius Press.

In this exclusive excerpt, Pentin examines one of the most controversial aspects of last year’s synod: the notorious Relatio post disceptationem, or interim report, released half-way through the synod discussions.] 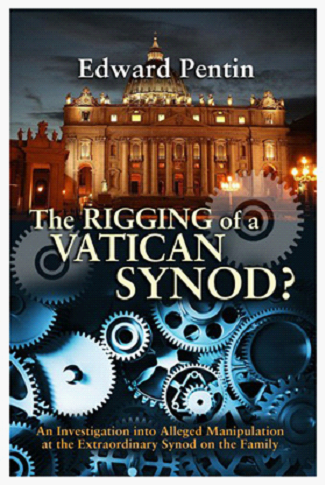 What had provoked many to allege rigging of the meeting, both inside and outside the synod hall, was the publication on October 13 of the Relatio post disceptationem, or interim report, on the first week of the synod’s discussions.

Many synod fathers were angry that theRelatio did not represent the majority view of the synod’s participants or the discussion that had occurred during the week and was issued without them seeing it.

George Cardinal Pell, prefect of the Secretariat for the Economy, was the first to protest in a debate in the aula on the day of the Relatio‘s release, followed by a number of heated interventions. Concerned that the report would go out without anyone remarking on it, he pointed out what was good about the report, but he also noted some serious deficiencies in the text. The Australian cardinal had to persist in his protest in the face of the synod managers who would have liked him to be quiet, sources who were present said.

In a television interview on October 16 with Catholic News Service, Cardinal Pell said the document was “tendentious, skewed, it didn’t represent accurately the feelings of the synod fathers.” He said “three-quarters” of those who discussed it afterward “had some problems with the document”. He added that “a major absence” in the document was scriptural teaching and “a treatment of the Church tradition”.

“It was as though there was an idealized vision of every imperfect situation”, Cardinal Pell said. “One father said to me…that he wouldn’t want his young adult children to read it because they’d be confused, and that was said in some of the working groups.”

The interim report “created an impression that the teaching of the Church has been merciless so far, as if the teaching of mercy were beginning only now”, said Polish Archbishop Stanislaw Gadecki of Poznan.

At issue were three controversial paragraphs the contents of which had been barely, or not at all, discussed by the synod fathers. One of these paragraphs referred to proposals, supposedly made by some of the synod participants, for readmission of divorced and civilly remarried Catholics to Holy Communion, and two other paragraphs dealt with the pastoral care of homosexuals and cohabiting couples.

The most contentious paragraphs were under the heading “Welcoming homosexuals”. The section started off by saying homosexuals “have gifts and qualities to offer to the Christian community”, adding: “Are our communities capable of providing (a welcoming home), accepting and valuing their sexual orientation without compromising Catholic doctrine on the family and matrimony?”

It continued: “Without denying the moral problems connected to homosexual unions, it has to be noted that there are cases in which mutual aid to the point of sacrifice constitutes a precious support in the life of the partners.”

Critics pointed out that there was no reference to Catholic doctrine that sexual relations between people of the same sex are “intrinsically disordered“, that the acts are gravely sinful (or sinful at all), or that homosexual orientation was “objectively disordered”.

In an interview on October 17, Cardinal Burke described the interim report as a “gravely flawed document that does not express adequately the teaching and discipline of the Church and, in some aspects, propagates doctrinal error and a false pastoral approach”.

Trying to explain how the document came to be, Cardinal Erdö told Vatican Radio that the sixteen officials who drafted the report struggled to synthesize the positions of thirty to forty bishops on any given topic and rushed to finish it on time. He acknowledged that there may have been instances when the report said “many” bishops had proposed a certain position when only “some” had, the Associated Press reported.

Archbishop Bruno Forte, the synod’s special secretary, was widely considered to have been the main author of the document. He had been known for his “progressive” positions and for earnestly promoting changes in pastoral practice toward people in “irregular” unions, while claiming these changes are true to Catholic doctrine.

The Italian theologian, together with all the members of the drafting committee, drew on the lengthy written speeches of each synod father submitted prior to the meeting. Apparently, certain points from these written speeches found their way into the draft report, even if the bishops had not mentioned them during the four minutes allotted to each speaker. Vatican spokesman Jesuit Father Federico Lombardi said he recalled only one speech out of about 265 that discussed homosexuals during the debate.

Defenders of the report, therefore, say it is not surprising that much did not seem familiar in the interim report because the written submissions were not made public or distributed to the bishops themselves. The oral presentations only reflected a summary or particular point that a bishop wanted to make. As none of the verbal interventions was transcribed, it would also have been difficult to work on summarizing every synod father’s submitted intervention and then adjust it as the synod went on according to what the synod father said in the synod hall. Also, as the interim document, it had to be produced quickly so it could form the basis of discussions for the second week.

Father Stephen Fawcett, an assistant at the synod responsible for keeping an official diary of the entire proceedings, said that “in fairness to them [those who drafted the report], it was a huge task because you had the Lineamenta [guidelines for the synod] that came out beforehand and was seventy-five pages long. Then you had 182 synod fathers making 189 inputs. There were also five hours of free debate, and in forty-eight hours they had to summarize accurately all of that into fourteen pages in five languages. That’s a hard task.”

But he added: “On the other side, I don’t think anyone could say it was all a summary of the discussions. It just was not.”

The inclusion of the homosexual issue into the interim document seemed to upset Cardinal Erdö, who, as general relator, was responsible for the document’s contents. This, too, made many critics suspect that some kind of manipulation had taken place. Asked about the relevant paragraph during an October 13 press briefing on the report, he handed the floor to Forte, saying: “He who wrote the text must know what it is talking about.”

Associated Press reporter Nicole Winfield wrote that there was “no real way to know which bishop or bishops had proposed such ground-breaking language or whether it was more a reflection of Forte’s view”. As time went on, however, it was revealed that during the first week at most only three synod fathers referred to the same-sex issue. According to one source who was present in the synod hall, it “wasn’t an issue”, but was “made into an issue by the way the report was handled by the synod managers.” One synod participant, also speaking on condition of anonymity, said the Church is normally “very accurate” in the words she chooses, and “we never use that language.” Those paragraphs, he said, “didn’t even come close to coming up, so it’s not realistic to think that phrase was accidentally introduced.” He said the passages “bore no relation” to theLineamenta or the discussions but “came out of the blue.”

Speaking to reporters the day after the report was made public, Wilfrid Cardinal Napier, the archbishop of Durban, said the document was not what they were saying at all, adding: “Just like you, I was surprised that it was published.” He said the media saw the document “before we got it, so we couldn’t have possibly agreed on it.”

One eyewitness at the synod on the morning of the release of the interim Relatio recalled a synod father commenting, after hearing the document read out in the synod hall, that he would be “nervous about this document if it was going to go to the press”.

“Is it?” he asked the synod managers. “Err, it already has”, one of them replied, according to the eyewitness, adding: “We sent it to the press before we read it to you.”

The six-thousand-word Relatio was also translated into several languages just forty-eight hours after it was published. For many critics, this amounts to further evidence that at least some of it had been written before the first week of discussions had ended or possibly even before the synod had even started.

Cardinal Napier, one of the fifteen members of the permanent council of the synod,

Like Loading...
‹ Confidential Meeting Seeks to Sway Synod to Accept Same-Sex Unions
The Story Behind the Synod’s Final Document ›

Tags: THE SYNOD ON THE FAMILY