Home › Hinduisation of the Catholic Church in India › DOMINIC FERNANDEZ DIRECTOR OF THE NATIONAL BIBLICAL, CATECHETICAL AND LITURGICAL CENTRE [NBCLC], BANGALOREWEARS A HINDU MARK IN THE CENTER OF HIS FOREHEAD

DOMINIC FERNANDEZ DIRECTOR OF THE NATIONAL BIBLICAL, CATECHETICAL AND LITURGICAL CENTRE [NBCLC], BANGALOREWEARS A HINDU MARK IN THE CENTER OF HIS FOREHEAD 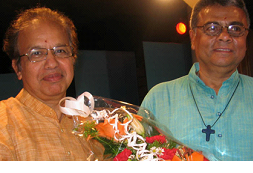 News & Pics: Jessie Rodrigues
Daijiworld Media Network – Bangalore (SB) September 28, 2009: It was a joyous moment for the religious, staff of NBCLC and faithful to join in the celebration of St Cleophas feast, the birthday of the director of NBCLC, the first celebration in the centre here recently.

Fr Antony Kalliath, assistant director of NBCLC in his welcome address appreciated Fr Cleo
[Fr Cleophas Dominic Fernandes] for his friendly approach with everyone in the centre.

The programme began with the Holy mass with Fr Cleo as main celebrant and Fr Antony along with Fr Vijay Shanthraj as co-celebrants. This was followed by a cultural programme to felicitate Fr Cleo.