For Fr. Joe Pereira, Mother Teresa is one of two occult nadis, energy channels that drive him. 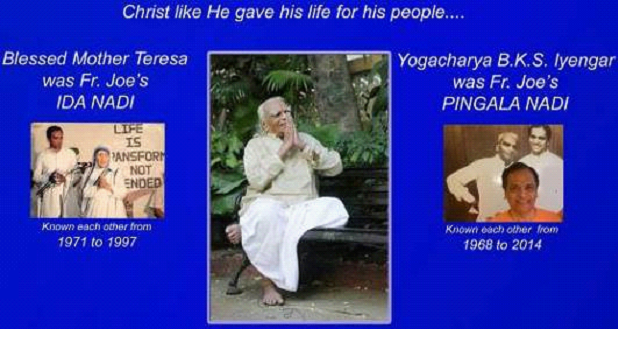 One could hear as Fr, Joe shared with Gitaji (daughter of BKS Iyengar) that Guruji Christ like gave his life for his people. Gitaji humbly acknowledge what Fr. Joe shared and said “Yes Fr. Joe … He gave all that he had for his People” As we drove back to Mumbai, Fr. Joe shared how he would miss Guruji but bounced back saying … “My Ida Nadi that’s Blessed Mother Teresa and my Pingala Nadi Guruji Iyengar liveth in me.” (The two channels of spreading spiritual energy through the body).

According to the yogic scriptures, there are 72,000 nadis, or energy channels. Among them, ida, pingala, and sushumna are the most important.

The nadis and the sushumna are occult esoteric energy channels in the purported subtle body of a person.

The sushumna is awakened so that pranic energy flows upwards from the lowest chakra to the crown chakra, when one attains yogic enlightenment and god-realisation.

In the Bombay Archdiocesan weekly The Examiner

Full page report. The article is too long for me to reproduce here, except for a few salient points. I quote:

“Spirituality, yoga, meditation and a Catholic approach to the problem of addiction have ensured this house of grace survives and grows… This support structure is made possible by […] a strong psychosomatic practice of Eastern discipline, particularly yoga and meditation.”

The photograph accompanying the article is that of Mother Teresa blessing the inauguration of the Vasai centre, 1991. 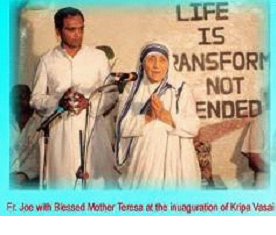 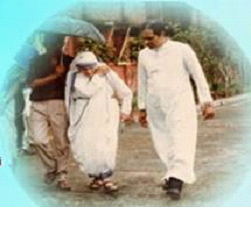 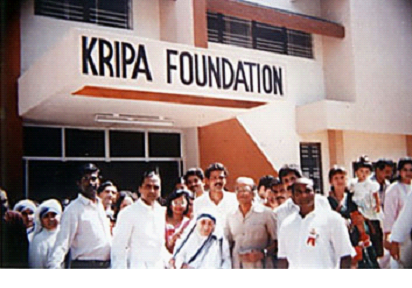 The guiding philosophy is a reflection of the spirit of service and dedication, enshrined in the work of Mother Teresa, who personally blessed our Kolkata and Vasai centers.

I also have an 8-page KRIPA pamphlet that says it on its cover page.

FROM THE DVD “INDIA: THE LOTUS AND THE CROSS” AN EXTRACT FROM THE TRANSCRIPT:

A longtime associate and friend of Mother Teresa, whom he simply, reverently calls “Mother,”
Pereira conducted yoga sessions during retreats held for her Missionaries of Charity sisters.

Building bridges between yoga and Catholicism

The remarkable 65-year-old priest from India says the most influential figures in his life — the teachers who represent “the yin and yang” of his spiritual education — have been
Mother Teresa of Calcutta
and India’s
B.K.S. Iyengar, arguably the world’s most influential living yoga master.

Despite his long friendship with Mother Teresa, Pereira remembers decades ago how she became a little concerned and asked him,
“Father Joe: What is this yoga you are teaching my nuns?”

Pereira had offered yoga to the nuns because they were falling asleep during their prayers. Yoga was a way for religious people to stop their ceaseless “babbling” in prayer, liturgy and conversation. Yoga, he said, allows religious people to heed God’s plea in the Bible to open their body and heart to the “indwelling spirit of God.”


The 3rd Mother Teresa Memorial National award for Social Justice was awarded to Kripa Foundation on 26th October 2008 in recognition of its contribution to addressing social ills, especially in the service of the marginalised owing to addiction and HIV/AIDS. Rev. Fr. Joe H Pereira, Founder Trustee of Kripa Foundation, received this prestigious award at the hands of Teesta Setalvad and Shri Mahesh Bhatt.

Also reported in the Bombay Archdiocesan weekly The Examiner, November 29, 2008

Kripa Foundation inaugurated its new centre at Mother Teresa Ashram, Gandhi Nagar, Gujarat. This is Kripa’s 62nd facility in the country. The Centre was blessed by His Grace Archbishop Stanislaus Fernandes with a prayer service. The Archbishop in his speech appreciated the efforts of Kripa.

It was a memorial day for Kripa Kolkata, when Priest and Sisters from Missionaries of Charity paid a visit … The highlight being the participation of clients of different Faiths.

Orientation programme for Missionaries of Charity Brothers at Kripa Vasai

14 Brothers from the Missionaries of Charity visited Kripa Vasai on the 29th of August 2012 … This is an annual visit of fresh batches of brothers from different regions of India.

I have not copied the many photographs that accompanied all of the above blogposts. They are of Missionaries of Charity nuns, religious brothers and priests coming to KRIPA for “orientation” or being served by Fr. Joe Pereira at their institutions.

They have patronised Fr. Joe Pereira/KRIPA more than any other Indian religious order has!!!!!

Fr. Joe Pereira began the practice of Yoga through B.K.S. Iyengar in 1968. By 1971, when he first encountered and influenced Mother Teresa, at the time that he wanted to leave the priesthood as some of his disenchanted colleagues had done, (he was “having a crisis of faith” and was in love with a woman; source: http://www.lifepositive.com/Spirit/Meditation/The_Yogic_Priest102008.asp), he was already a certified Iyengar Yoga instructor and that was all that he lived for and continuously strived to communicate to others. It is apparent that — by his own admission — yoga had not benefited him spiritually and had already adversely affected his zeal for his Catholic Faith and the priestly life.

[It has happened often before, to the Belgian priest J.M. de Chanet who propagated yoga at St. Peters Church in Bandra, and to yoga priest Fr. Anthony Lobo of Pune, also a student, like Joe Pereira, of BKS Iyengar.

Fr. Francis Barboza SVD., a Bharatanatyam dance exponent who was “deeply involved in expressions of Hindu worship” and practiced at the SVD’s Gyan Prakash Ashram in Andheri, Mumbai, also left the priesthood. Today, Fr. Joe remains in the Church, but is a Catholic priest only in name.]

It was not long before he became the yoga guru to the sisters of the Missionaries of Charity as Douglas Todd of the Vancouver Sun has recorded (on page 3). From thence on, things looked up.

Mother Teresa inaugurated Kripa Foundation in Vasai in 1994 and handed over the Boy’s Town orphanage in Gangarampur, North 24 Parganas district, Kolkata, to Kripa Foundation. She also had the Italian Consul inaugurate the facility.

From the above account there can be no doubt that Mother Teresa wholeheartedly endorsed Fr. Joe Pereira in his propagation of Hindu yoga through his KRIPA Foundation.

Fr. Joe Pereira’s KRIPA Foundation is an NGO which is flush with money and funded by the MCs!!!!!

Fr. Joe Pereira likes to point out that Mother Teresa died on September 5, 1997, a few hours before the day of his birth anniversary.

An extract from one of my earlier reports:

“THE YIN AND THE YANG OF FATHER JOE”

The above is the title of a six page write-up by Anne de Braganca Cunha on Fr. Joe Pereira that was published in the February 2002 issue of HEALTH AND NUTRITION. The box on page 75 of H&N says:

“What was your severest crisis?

I was emotionally involved with a woman. I wondered: Should I leave the priesthood, marry her, have children, lead a normal life! I was severely stressed and took refuge in brandy and the occasional cigarette (there are no vows against substance abuse). Eight of my 19 classmates had left the priesthood. I could see myself going the same way. I spoke my heart out to two priests who were also undergoing similar crises. One chose to continue with the priesthood; the other left. The woman went away. I was sunk in the pits of bewilderment and despair… It was 1971…

I went to Mother Teresa and sobbed, ‘I want to leave the priesthood and the Church. Mother, help me’…

‘You are God’s anointed’ she said gently, ‘Jesus wants you. Please don’t quit’… [She] remained my guiding force.