One Prakash Lasrado writes to a number of Cardinals, Bishops and priests recommending what he believes to be proper “Interfaith Dialogue” but is a concoction of syncretism and New Age to say the least:

Your fundamentals on yoga, homeopathy, inter-religious dialogue not clear.

Here is some education for you on interfaith dialogue. See the difference between dialogue and debate etc.

(He is particularly involved in Catholic-Hindu dialogue)

Monsignor Pedro López Quintana of the Secretariat of State in the Vatican wrote, “The Holy Father* wishes me to express his gratitude for the … Scarboro Missions’ Golden Rule poster which you sent him.” On January 4th 2002, eight ambassadors from the North American Interfaith Network and Scarboro Missions presented the Golden Rule poster to Mrs. Gillian Sorensen, Assistant Secretary-General of the United Nations, where it is now on permanent display.

*The Pope in 2002 was John Paul II. Remember the infamous “Spirit of Assisi” of Pope John Paul II that Cardinal Ratzinger boycotted in 1986? It is not in the least surprising that the Pope appreciated this “13 religions” initiative of Paul McKenna which include those who deny the Trinity and the divine nature of Jesus (Unitarians), and those who deny that Jesus is the Son of God, 1 John 2:21-23 (Muslims): 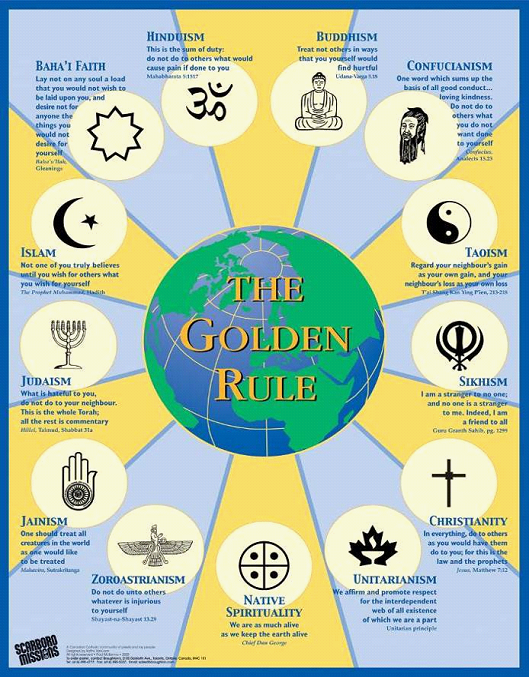 What does this Scarborough Missions promote? A lot… but I’ll try and be brief.

Fr. Thomas Keating is a Roman Catholic priest and Trappist Monk who has made a major contribution to the centering prayer movement and to Interfaith spirituality. He is convener of the Snowmass Conference and a member of the international monastic inter-religious movement. He authored the following report:

A report on an experience of on-going inter-religious dialogue might be helpful at this point. In 1984, I invited a group of spiritual teachers from a variety of the world religions — Buddhist, Tibetan Buddhist, Hindu, Jewish, Islamic, Native American, Russian Orthodox, Protestant, and Roman Catholic — to gather at St. Benedict’s Monastery in Snowmass, Colorado, to meditate together in silence and to share our personal spiritual journeys, especially those elements in our respective traditions that have proved most helpful to us along the way.

We kept no record and published no papers. As our trust and friendship grew, we felt moved to investigate various points that we seemed to agree on. The original points of agreement were worked over during the course of subsequent meetings as we continued to meet, for a week or so each year. Our most recent list consists of the following eight points:

1. The world religions bear witness to the experience of Ultimate Reality to which they give various names: Brahman, Allah, Absolute, God, Great Spirit.

2. Ultimate Reality cannot be limited by any name or concept.

3. Ultimate Reality is the ground of infinite potentiality and actualization.

4. Faith is opening, accepting and responding to Ultimate Reality. Faith in this sense precedes every belief system.

5. The potential for human wholeness (or in other frames of reference) — enlightenment, salvation, transformation, blessedness, “nirvana” — is present in every human person.

6. Ultimate Reality may be experienced not only through religious practices but also through nature, art, human relationships, and service of others.

7. As long as the human condition is experienced as separate from Ultimate Reality, it is subject to ignorance and illusion, weakness and suffering.

8. Disciplined practice is essential to the spiritual life; yet spiritual attainment is not the result of one’s own efforts, but the result of the experience of oneness with Ultimate Reality.

If you didn’t get it by reading that, Fr. Thomas Keating and Centering Prayer are New Age. See

2.4 A meditation on Shinto wisdom

2.7 A meditation on the Hindu Namaste greeting

2.8 A meditation on the teaching of Black Elk (Native American)

2.10 A meditation on the teaching of Mother Teresa

2.12 A meditation on the “gold” in the Golden Rule

3.7 Exploring the circle (a meditation on the Golden rule poster!!!)

The only thing that they seem to have missed is a meditation on meditation!

Psalm 119:97: How I love your law O Lord! It is my meditation all the day. (Catholic New American Bible)

Psalm 119: 99: I have more understanding than all my teachers when your decrees
are my meditation. (-do-)

Spend time gazing upon the Golden Rule Poster as an image. Allow it to speak to you. Study the visual elements of the poster – its overall design, its various shapes, lines, colours. Consider how these various elements relate to one another. Reflect on the symbolic meaning of the poster image, particularly from the perspective of international community and global citizenship.

On the poster, note that:

The globe – the earth – our world – resides at the very centre.

The words, “The Golden Rule”, are superimposed on the globe.

On the globe at the centre, the lines of longitude and latitude connect the various continents to one another in one single global human community.

There are no lines dividing the various continents into nations.

The poster can be conceived as a wheel with numerous spokes going out from the central hub which is the globe.

The symbols of the various religions are gathered in a circle of circles – the circle is the most universal of religious symbols and represents unity and interconnectedness – in the circle, “everything is connected and everything is one”.

Human beings have long recognized the circle as a powerful, healing agent and have gathered in circles for prayer, worship, ritual and celebration. The noted Swiss psychologist, Carl Jung, referred to the circle as an “archetype of wholeness.” In the English language, the words “wholeness”, “holiness”, “healing” and “health” have the same etymological root (which means “complete” or “whole”). The circle thus functions as a symbol for wholeness, holiness and health.

The circle is also a symbol for time, eternity, balance, community, consecrated space and the cycle of birth and death.

The wheel is a common symbol in religious and cultural traditions – the wheel of time, the wheel of fate, and so on. The wheel of dharma in Buddhism is the eightfold path symbolized by an eight-spoke wheel, a prevalent symbol of the Buddhist tradition.

“Mandala” is a Sanskrit word meaning “circle”. In the Hindu and Buddhist traditions, mandalas are circles symbolically designed to represent the cosmic order. Mandalas belong to most spiritual and symbolic traditions as universal images of the human longing to achieve order within diversity and integration within creation. The rose windows of the Gothic cathedrals, the Celtic stone circles, the yin-yang symbol, the Navajo sand paintings, the Philippine Christmas Star, labyrinths, mazes, circle dances, wreaths, halos, and dream catchers are all mandalas that help individuals define themselves within a wider world of meaning and value.

Carl Jung is, according to the 2003 Vatican Document on the New Age, the third ranked leading New Ager.

There’s plenty of New Age in the cited paragraphs above but I’ve only highlighted a few words in red.

Secular humanism too is one of the “religions” (“Interfaith“, they said) that they would “dialogue” with:

Take time to slow down your mind, your emotions and your body. You may want to do some deep breathing exercises (pranayama?), yoga or another form of physical movement. Or you may want to simply sit in stillness.

Realize that harmony of body and spirit is important. Adopt a body stance that is peaceful, balanced, relaxed and alert. Try to keep your back as straight as possible (padmasana?).

You may want to light a candle and close the curtains in order to create a meditative atmosphere.

Open your heart and mind. As a final preparatory gesture, you may want to centre yourself by:

-asking for spiritual help
(from what entity?) I didn’t find “Catholic” or “Jesus” or even “God” on any of the pages of this web site, just one single verse from the Gospel of St. Matthew.

The site recommended to the Cardinals, Bishops and priests by Mr. Lasrado is inimical to Catholics and to genuine interreligious dialogue. See

Like Loading...
‹ The Archdiocese of Bombay appears to attempt to exercise a liberal influence on the forthcoming 2015 Synod on the Family
DECREE REMITTING THE EXCOMMUNICATION “LATAE SENTENTIAE” OF THE BISHOPS OF THE SOCIETY OF ST PIUS X ›

Categories: Hinduisation of the Catholic Church in India, new age