Home › Hinduisation of the Catholic Church in India › FATHER THOMAS D’SA[FORMER] DIRECTOR OF THE NATIONAL BIBLICAL, CATECHETICAL AND LITURGICAL CENTRE [NBCLC], BANGALORE WEARS A HINDU MARK IN THE CENTER OF HIS FOREHEAD

FATHER THOMAS D’SA[FORMER] DIRECTOR OF THE NATIONAL BIBLICAL, CATECHETICAL AND LITURGICAL CENTRE [NBCLC], BANGALORE WEARS A HINDU MARK IN THE CENTER OF HIS FOREHEAD

The Indian Rite of the Mass 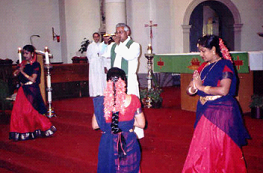 You are at St. Ann’s Church, Toronto, Canada. It is July 2, 2006 during Sunday Mass. The co-celebrating priests are … Fr. Thomas D’Sa from India and … the parish priest of St. Ann’s. Fr. D’Sa is the Director of the National Biblical Catechetical Liturgical Centre, NBCLC, a department of the Conference of Catholic Bishops in India, which officially endorses and promotes this Indian Rite of the Mass.

In the first part of the Mass, equivalent to the Prayers at the Foot of the Altar, the girls dance and sing in honor of the Holy Trinity, the Father, Son and Holy Spirit… However, the chant features the mantra “OM”, the supreme vibration in Hinduism. OM also represents the Hindu trinity Brahma, Vishnu and Shiva.

During the Mass both priests sport a white dot between their eyebrows. The most common meaning of this dot is to proclaim oneself Hindu. *A traditionalist site