Fr. M. John Valdaris is a priest, since over 40 years, of the Kottar diocese in Tamil Nadu. He has been based for many years in Chennai in the archdiocese of Madras-Mylapore and is notorious for propagating yoga-based spirituality with an eclectic blend of “charismatic prayer” and pseudo-psychological techniques.

He has recently initiated a monthly programme at a Catholic school in Bangalore city.

At http://cancer-care-centre.cfsites.org/custom.php?pageid=15152 we read that Fr. Valdaris has “authored more than 175 books on Psychology, Theology and Spirituality, of these the last 75 books have been on “The Spirituality of Our Lord’s Prayer”.

He had pioneered the charismatic movement in Tamil Nadu of South India in the year 1973. His creativity does not stop with books alone; he had written at least 1000 Hymns on this Spirituality.“ 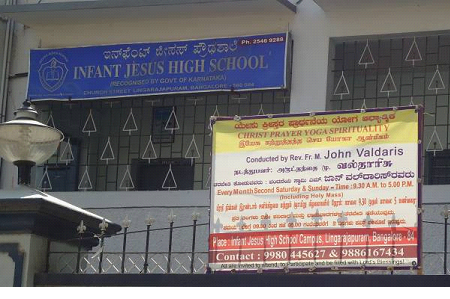 All are invited to attend, to participate and be filled with Lord’s Blessings!

Every man can reach the Christ consciousness when his body performs as a community of purified thoughts liberalised from the evil bonds of hatred, fear, guilt, anxiety, inferiority complex and so on with the help of spiritual faith, his Spirit rises to its origin, Our Father. (1 Corinthians 6:19, 15:44) Such soul is free from all evils and the organisation is progressing towards the goal of creating a community of liberated souls free from all social and personal disasters, specially the civilised diseases: cancer, stroke, AIDS, cardiac problems etc.

1. As the actual problem lies deep within the sub-conscious mind, a one-to-one dialogue is initiated with the patient to ease them out.

2. Based on the data gathered from the dialogues, a specially designed questionnaire is given to categorise the approach of the patient towards the problem/disease.

3. Since the patients are embedded with extreme levels of negative emotions, a special and unique meditation named as ‘Christ Prayer Yoga‘ is taught to them, just to neutralise the negative thoughts and balance them psychologically.

4.  To activate the sub-conscious mind of the patient, a special environment is needed. To meet this need, a special hall named ‘Jonah Incubation Hall’ is used to initiate dreams in patients.

5. As our sub-conscious mind is linked with the divine consciousness, whatever be their faith, the ultimate change takes place in the universal mind and reflects as symbolic interpretations through their dreams. These symbols or images appear through meditation or sleep explains the actual problem, its severity and the stages of healing.

6. As part of the treatment, constant self-suggestions are advised. For this purpose, slogans and positive image formations are adopted. This practise along with meditation slowly transforms the inner soul to a positive tendency and thereby initiating healing physically.

With regard to a cancer in one of his patients, Fr. Valdaris maintains that “The stagnated negative emotions resulted in cancer.”

The most popular work, “Surgery of the Soul”, Spire Books, 1973, of Dr. William Standish Reed is sold under the “New Age & Alternative” category, see http://www.ebay.com/itm/Surgery-Soul-WILLIAM-STANDISH-REED-1973-1st-ed-Paperback-Book-/330821912219?pt=AU_Non_Fiction_Books_2&hash=item4d0685c69b. He, like Fr. Valdaris, founded a Christian “Healing Center” and is said to be “the originator of a new school of medical thought and practice – ‘Logopsychosomatic Medicine’,” http://thehealingcenterorkneysprings.org/html/in_memory.html.

Read http://craniolondon.wordpress.com/tag/hans-selye/ and check out that the work of Hans Selye, reportedly the first to demonstrate the existence of biological stress, also has New Age associations.

A Call to Vigilance (Pastoral Instruction on New Age)

Few fields have been as susceptible to manipulation by New Age as psychology … there has been a varied succession of currents of thought in psychology that are connected to a greater or lesser degree with New Age’s ideas and therapies. In particular, so-called transpersonal psychology, founded by the Italian psychologist Roberto Assagioli (1888-1974), attempts to go beyond the individual’s psychic experience in search of a superior collective consciousness that would be the door to discovering a “divine principle” lying at the core of every human
being.
This gives rise to a multitude of New Age’s typical techniques…

“Assagioli, a student of Freud… later got disillusioned with the theory of Freud. In 1910, he formulated a holistic theory of human development that is called ‘Psychosynthesis’ … Like Carl Jung, Assagioli postulated a realm called
collective unconscious…”

Roberto Assagioli
is named in the February 3, 2003 Vatican Document on the New Age as one of the world’s most influential New Agers, Notes 15!

This is a special page added to widen our knowledge in this spectrum. The websites referred below may be useful for the viewers.

1. www.apm.org
[This site is about Psychosomatic Medicine]

2.
www.brain.com
[This site does not appear to have any related relevance]

3.
www.cancerhelp.org.uk
[This is a secular cancer-related site]

4.
www.curezone.com
[This not appear to be useful either]

5.
www.germannewmedicine.ca
[This one looks suspiciously New-Agey]

8.
www.advaita-vedanta.org
[The site of
Advaita Vedanta Anusandhana Kendra: “The Advaita Vedanta Anusandhana Kendra (Advaita Vedanta Research Center) is dedicated to increasing knowledge of the tenets of Advaita Vedanta–a philosophy and religion based on the Vedas that teaches the non-duality of the individual soul and God–as expressed by its foremost exponent Shankaracharya (whose picture you see above) and the unbroken succession of teachers descended from him.“]
Christians, avoid this. What on earth was Fr. Valdaris thinking when he gave a link to this site? Can one presume that it was the inspiration for his “Christian prayer Yoga Spirituality“?

Fr. John Valdaris is into a fair amount of association with New Age as we have seen above. He uses, among other treatments, Dream Therapy which is New Age. Except in the one, single testimony of cure from cancer at his site where he brings in the aspect of forgiveness, one does not find him, a Catholic priest and supposed pioneer of the Charismatic Renewal, stressing anywhere in his web pages on the imperative need for forgiveness and for Confession, followed by the Eucharist, which are Sacraments of Healing.

One may wonder what problem there could be with this priest’s using psychology. At this ministry’s web site, there are almost a score of articles on the New Age dangers of modern secular, humanistic pseudo-psychological techniques, many of which come blended with scientific jargon and spirituality, and propagated by priests like Fr. Valdaris. To avoid going into a detailed explanation of the matter, I submit herewith a recent article by anti-New Age Catholic crusader Susan Brinkmann who answers a question from an Indian about Fr. John Valdaris‘ cancer-treatment programmes.

Can You Mix the New Age, Psychology and Modern Medicine?

GA asks: “I was hoping you could give me some more details on this following link on a Priest who claims to be able to cure cancer but the technique he uses sounds very new agey to me.  Some of my Catholic relatives have been sending this link and I want to be able to warn them appropriately on the same.”

I have some serious misgivings about Father John Valdaris and his Cancer Care Centers and also found many New Age red flags on his website.

To begin with, Fr. Valdaris describes himself as a priest and psychologist from India who calls himself a “pioneer” of the charismatic movement in Tamil Nadu of South India. An author of many books and over 1,000 hymns, his ministry appears to be a mix between liberating people from both external and internal evil and using a psychological approach to the cure of major illnesses such as cancer, AIDS, strokes, etc.

What concerns me about his work is his belief in the thoroughly New Age concept of Christ consciousness, claiming that “Every man can reach the Christ consciousness when his body performs as a community of purified thoughts liberalized from the evil bonds of hatred, fear, guilt, anxiety, inferiority complex and so on with the help of spiritual faith, his Spirit rises to its origin, Our Father.”

For those of you who don’t know what Christ consciousness is, it is a concept based on a New Thought belief that sin comes from believing that that we are cut off from God. If we but change our thinking and realize we are a part of God and will one day return to Him, we’ll achieve “Christ consciousness” which is what some New Agers believe Jesus came to do.

Fr. Valdaris’ psychological approach takes a different angle. He believes that because so many of us are not given the love, care and acceptance we need, the resulting disappointment turns into negative emotions such as fear, hatred, anxiety, guilt and inferiority complexes. “And these negative emotions may create a very deep hurt in our ego or self-consciousness leading to major auto-immune diseases such as Cancer, AIDS, stroke and heart troubles,” he writes.

He takes a “mind, body, spirit” approach to healing these maladies with a team of “volunteers” (some doctors and nurses are included among the volunteers) who work primarily through two “biannual awareness camps.”

“Since the patients are embedded with extreme levels of negative emotions, a special and unique meditation named as ‘Christ Prayer Yoga’ is taught to them just to neutralise the negative thoughts and balance them psychologically,” he explains.

In order to “activate the sub-conscious mind of the patient” they are put into the “Jonah Incubation Hall” which is used to initiate dreams in the patients.

“As our sub-conscious mind is linked with the divine consciousness, whatever be their faith, the ultimate change takes place in the universal mind and reflects as symbolic interpretations through their dreams,” he explains. “These symbols or images appear through meditation or sleep explains the actual problem, its severity and the stages of healing.”

This is a big problem on several levels. First of all, there are numerous prohibitions in Scripture against the practice of “observing dreams” such as in Leviticus (19:26) and Deuteronomy (18:10).

Prophets such as Jeremiah repeatedly warned people against giving heed to dreams.  “I have heard what the prophets say who prophesy in my name. They say, ‘I had a dream! I had a dream!’ How long will this continue in the hearts of these lying prophets, who prophesy the delusions of their own minds? They think the dreams they tell one another will make my people forget my name, just as their fathers forgot my name through Baal worship. Let the prophet who has a dream tell his dream, but let the one who has my word speak it faithfully. . . .” (Jeremiah 23:25-28)

Second, there is no scientific evidence to support the idea that images received in dreams can or should be used to self-diagnose. It seems hardly necessary to point out how dangerous this can be.

He also professes another New Age mind-control technique which involves the use of constant self-suggestion as a way to alter our worldview, thus bringing about healing.

“For this purpose, slogans and positive image formations are adopted. This practice along with meditation slowly transforms the inner soul to a positive tendency and thereby initiating healing physically,” he says.

Once again, there is no scientific support for any of this.

However, to his credit, Fr. Valdaris does not claim that his work has any scientific backing and provides only anecdotal testimonies to support his theories. He also encourages anyone who becomes involved in his “new healing therapy” to continue with their regular medical treatment in order to keep the disease under control – a recommendation for which he should be applauded.

It is my opinion, after reviewing the site, that Fr. Valdaris does blend New Age concepts into his healing methods which could prove costly to the poorly-churched individual. While he does encourage patients to continue with their medical treatment, the hyper-language and sweeping claims he makes about the effectiveness of his techniques could easily encourage someone who is ill and desperate enough to be swept away on these false hopes and believe they can give up their conventional therapy altogether.

For these reasons, I don’t recommend becoming involved with Fr. Valdaris’ treatment.

This will be checked out in due course and the report updated.